Select Configure & Download to download the reference implementation and the Intel® Optimized Data Discretization Software for evaluation and testing of your Intel®-based solution. 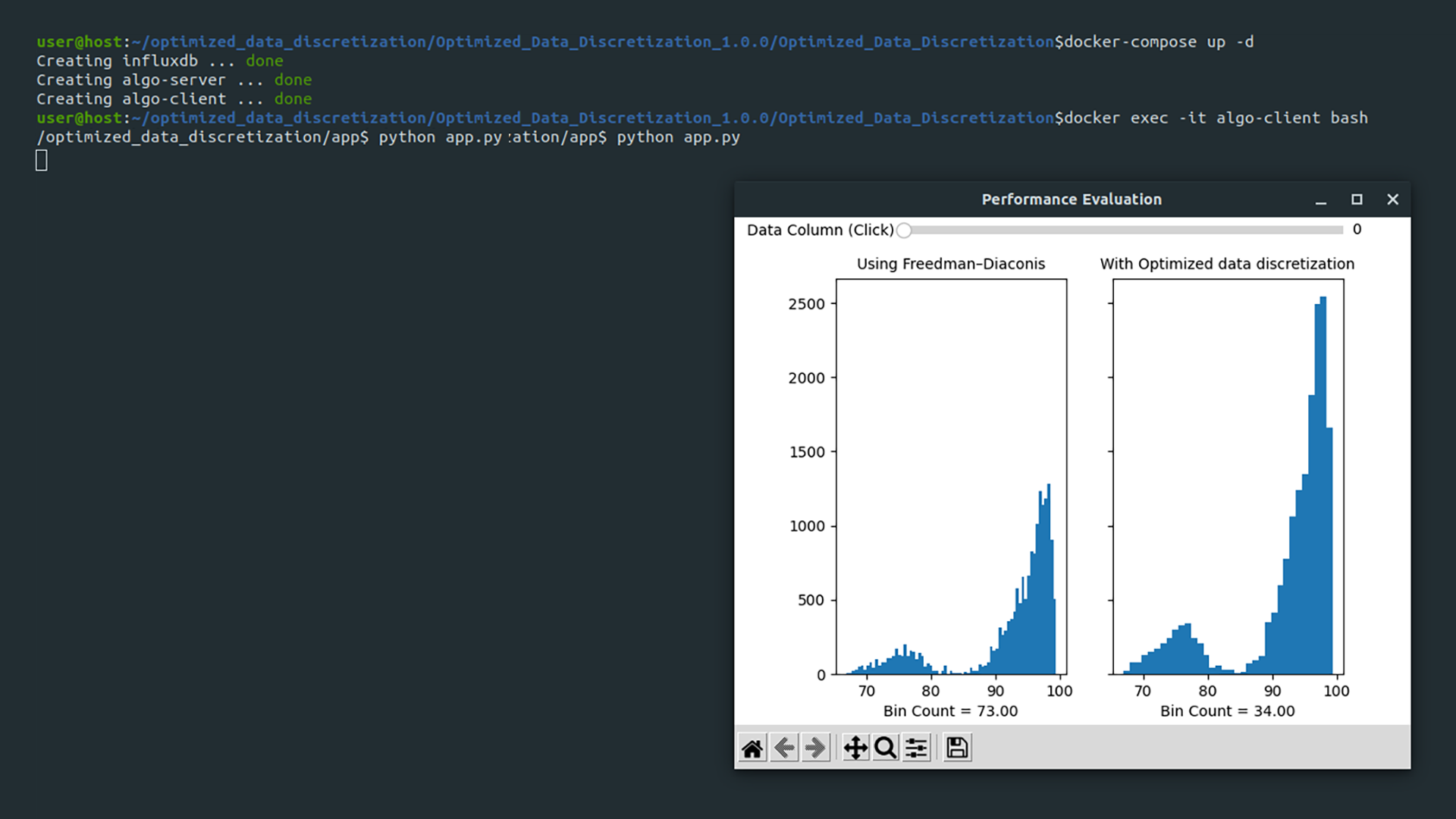 Two types of reference clients are included in this reference implementation:

Standalone Application is released as a Python script. It displays two side-by-side histograms for comparison across series of datapoints selected via on screen slider.

Three containers are created as result of the docker-compose up command:

The Server and Client containers are created using the same Docker* image. The microservice server instance runs as part of docker-compose up command in algo-server container.

A microservice-based solution demonstrates an end-to-end pipeline utilizing discretization API to calculate optimal bin for a given set of data. The service offers data inputs from either CSV, Excel, or InfluxDB. Client, Server and InfluxDB are running in their respective Docker containers.

Three containers are created out of two images:

The reference implementation automatically discretizes or develops a histogram of data for advanced processing and analysis.

A histogram is a graphical representation of the distribution of numerical data. It is an estimate of the probability distribution of a continuous variable. Histograms are an effective tool to categorize or discretize real data. Categorizing real data into discrete bins is required for multiple machine learning and data mining methods. Binning real data into a fewer number of categories allows for better clustering and pattern matching by summarizing the raw data into meaningful segments, specifically when the data range is very large and the number of data samples is very high.

However, the greatest challenge in creating a histogram is the determination of the bin widths. The bin width should not be so small that the histogram loses its purpose, and on the other hand, should not be so large that the histogram deviates from the inherent distribution of the raw data. The histogram should be able to represent the raw data distribution, while simultaneously proving meaningful binning of the data into fewer categories for efficient data correlation and association, which is required for many types of machine learning and data mining methods. Hence, the problem reduces to identifying the optimal bin width.

Research focused on selecting an optimal bin width is ongoing. However, most of the published research looks at determining the bin width based on minimizing the difference in distribution between the original data and the histogram. As a result, the bin widths determined by these methods are often very small and not useful when the data range is very large.

Developing a meaningful histogram is key to the success of the subsequent data processing methods. This RI addresses this issue and provides a method that preserves the inherent resolution in the data or data distribution and simultaneously ensures a reasonably large bin width, thus allowing a meaningful summarization of the data. This method is an optimization between two competing factors: the best representation of data distribution and the bin width size.

The proposed method has been successfully tested with a wide range of data and compared with the methods published in literature.

Figures 2, 4, and 6 below present the histograms obtained by a well-known method in literature (Freedman-Diaconis rule).

Figures 3, 5, and 7 below show the histograms obtained by the reference implementation for the same data set.

Select Configure & Download to download the reference implementation and the Intel® Optimized Data Discretization Software for evaluation and testing of your Intel®-based solution.

In the below example, the state-of-the-art Freedman-Diaconis algorithm returned 73 bins and the Intel® Optimized Data Discretization RI calculated 34 bins while preserving the data distribution.

Attach to client container and run client.py from it.

Fill up the influxdb database with values. You need to do this step every time you initiate a Docker session and the values are available until you end the Docker session.

Run microservice client with the commands:

Invoking client.py will send a request to the server for histogram bin calculation on Excel data publisher.

The API library is provided as an .so file. The docker-compose.yml file sets up PYTHONPATH to lib directory for standalone application and microservice server containers for API invocation.

Regular usage of the API will require you to set up an environment variable as shown below:

The function below takes in an array vector of data and based on an innovative Cost function returns the optimal number of categories, width of each category, boundary values of each bin and the data belonging to each bin.

Summary and Next Steps

With this reference implementation you successfully evaluated different data distributions that have a wide range of values. Besides approximating the distribution, the reference implementation also optimizes the bin width. This method is best suited for cases where grouping of data into an optimal number of bins is essential for the success of subsequent data processes. One such application is associative memory techniques, which keeps a record of co-occurrences of values or entities for building associations. Also methods which are based on similarities in values, entities for developing recommendation engines, or for clustering profiles or mining patterns.

To continue learning, see the following guides and software resources:

If you're unable to resolve your issues, contact the  Support Forum.